I recently had the honour of being one of the guests on an episode of BBC’s The Conversation.  The episode is called Women Reclaiming Their Streets, and I’ve taken a screenshot from their website: 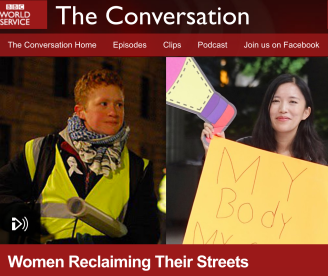 It was wonderful to speak with a feminist activist in another part of the world and share thoughts and experiences.  We agreed that it’s empowering for women to stand up together and speak about their lives.  We also talked about how different forms of feminist activism are just different tools within our “feminist toolbox,” and that the more tools we have, the better.  This episode, as the title suggets, is also about women reclaiming their right to be in public places without having to fit social standards, such as being pleasant and smiley.  Instead, we should feel free to be angry about social injustice and voice our own thoughts and opinions.

In this episode, “Krupa Padhy meets two women who have tackled violence against women head-on, by organising eye-catching and sometimes controversial street protests.”  The other guest is Finn Mackay, “one of the UK’s most influential feminist activists. She founded the London Feminist Network in 2004, the same year that she revived the Reclaim the Night marches….”

Here is a link to this episode: https://www.bbc.co.uk/programmes/w3csvs2g

My apologies for neglecting to post more on our website.  I’ve been posting most of our content on Facebook instead, and so I’ve now updated the website to include a preview of our Facebook posts on the side.  Below is a collage of some of the photos from our march in 2017, followed by the press coverage we received.  Thank you for your support! 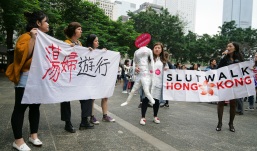 Here is a message from Angie:

A big thank you to all past and present supporters, marchers, organisers and volunteers. We’ve been marching together since 2011, and it’s wonderful to see that more and more people around the world are talking about sexual harassment and sexual violence.  Let’s continue to raise awareness about the issues and fighting victim blaming!

Please join us on Sunday 19 November 2017 as we march against sexual violence and victim blaming.  The exact time and place are yet to be announced.  Here is the link to our Facebook event: SlutWalk Hong Kong 2017.  Hope to see you all there.

Here are a few articles/photo essays from this year’s SlutWalk Hong Kong. 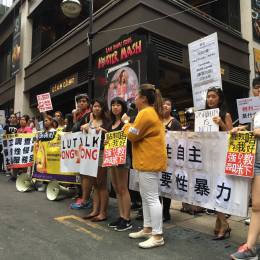 Blame the rapist, not the victim!
End violence against women!
Don’t teach me how to dress – teach people not to rape!

Location: forum in Chater Garden, Central
(then marching to the High Court and ending at Lan Kwai Fong)

Statements of support from:

SlutWalk Hong Kong will take place for the fifth time, as part of the international SlutWalk movement. The movement begun in Toronto, in 2011, when a police officer told students at York University to avoid dressing like “sluts” if they wanted to avoid being sexually assaulted. This movement, which is against sexual violence, victim blaming and rape culture, is still much needed, in Hong Kong and other locations. Earlier this year, HKFP noted that sexual harassment at universities in Hong Kong is not rare, just rarely reported.

Recently, a sexual assault case against the former leader of Bridge of Rehabilitation Co was dismissed as the courts would not accept the testimony of a victim with the mental age of eight. This former care home leader has since come out with outlandish, victim-blaming statements, calling the mentally disabled victim “crazy”, “delusional” and saying she “seduced him”. This case has outraged people all over Hong Kong. On October 20 and 23, over 1,500 people protested against the systemic failure of the private residential care homes for the elderly and mentally disabled, in which sexual and other abuse is widespread.

Also in recent news, the owner of a bar drugged and raped a customer, but the initial rape charge against him was dropped, and he was sentenced to just 240 hours of community service. The judge stated that the perpetrator had a good “business mind” and didn’t want to ruin his future prospects.

These cases illustrate the need for us to raise awareness concerning sexual assault, victim blaming and rape culture. Please join us this year for SlutWalk Hong Kong 2016.

1. Support victims – stop violence against women!
2. Independent investigation of “Bridge of Rehabilitation”, with representatives from patients’ families, patients themselves, parent organisations and social worker unions.
3. Increase public spending and end the privatisation and outsourcing of care homes – high quality care homes, safe from sexual and other abuse, should be a basic right.

Please note that the meeting point is the Patterson Street Pedestrian Zone (circled above on the map) (銅鑼灣百得新街, 行人專用區).  The closest MTR station is Causeway Bay(銅鑼灣), Exit E.  See you there!

More information to be announced in the days to come! 更多消息會在日內公佈！

Say NO to victim blaming! 一起站出來抗議性侵犯受害者反遭社會歧視！

translation: my body, my choice.